If Rise was all about setting up the chess board for this new take on author Pierre Boulle’s original concept and Dawn about moving the pieces into interesting directions, War fails to pull off a meaningful checkmate.

Six years into the rollicking reinvention of The Planet Of The Apes, and it’s fair to say that the “Ape-pocalypse” has been coming to a head  from the moment it rose. The third entry, War For The Planet Of The Apes arrives hoping to finally deliver on this promise, and while the journey of Caesar and his friends has never been more gripping or well-realised, it’s the movie’s wider story we’re struggling to go bananas over.

Set roughly 15 years after the events of 2011’s Rise Of The Planet Of The Apes, War reintroduces us to the plight of Caesar and his simian followers. No longer an established community with hopes of a better future, but rather a community on the back-foot, teetering on the edge of survival. This kind of formula shake-up to Fox’s reboot trilogy is perhaps War’s biggest triumph, painting a story that bravely knocks the rapid advancements made by ape-kind until this point back a few steps.

Though thwarted at the end of Dawn, the repercussions of Koba’s actions still haunt Andy Serkis’ Caesar, who for the majority of War’s running time is forced to wrestle with his own morality. His over-arching journey is an internal one and captured beautifully by a combination of Serkis’ remarkable emotional performance and some jaw-dropping CGI craftsmanship by WETA Digital. Not for one second whilst watching did we think that we weren’t watching a real ape on screen, and it’s a true testament how far and fast performance capture continues to progress. It’s a shame then that where this story stumbles is when it widens beyond Caesar’s personal battle.

You see, despite boasting a title that immediately evokes a sense of grandeur, War For The Planet Of The Apes is a surprisingly small story. Outside of two rather bombastic set pieces that bookend the movie, there are very few moments when the stakes are raised as high as they could be. Those expecting the mass-scale skirmish between races we were promised will understandably be disappointed, as Woody Harrelson’s Colonel fails to ever ratchet up the menace as much as Caesar and Koba’s clash of ideologies produced. He seems evil for evil’s sake, chewing up scenery in a classic case of monologuing at any given chance.

It’s not until half way through War’s running time that we eventually peel away at the centre of the wider story, and sadly what’s there isn’t particularly interesting or genre-breaking, at least to the degree that we’ve come to expect. If Rise was all about setting up the chess board for this new take on author Pierre Boulle’s original concept and Dawn about moving the pieces into interesting directions, War fails to pull off a meaningful checkmate. The type of film we end up moving into during the third act is perfectly fine, but clumsily renders our time getting there largely obsolete.

War For The Planet Of The Apes isn’t by any means a bad movie, just one that falls very short of its potential. Any interesting ideas it has with regards to where these two races are going or actions they’ve made until this point are unfortunately squandered for an extremely predictable final act that falls too close to summer blockbuster territory. The revolutionary reboot series feels like it’s come to its natural conclusion, one that prioritises a story non-deserving of the special effects and performances held within it. 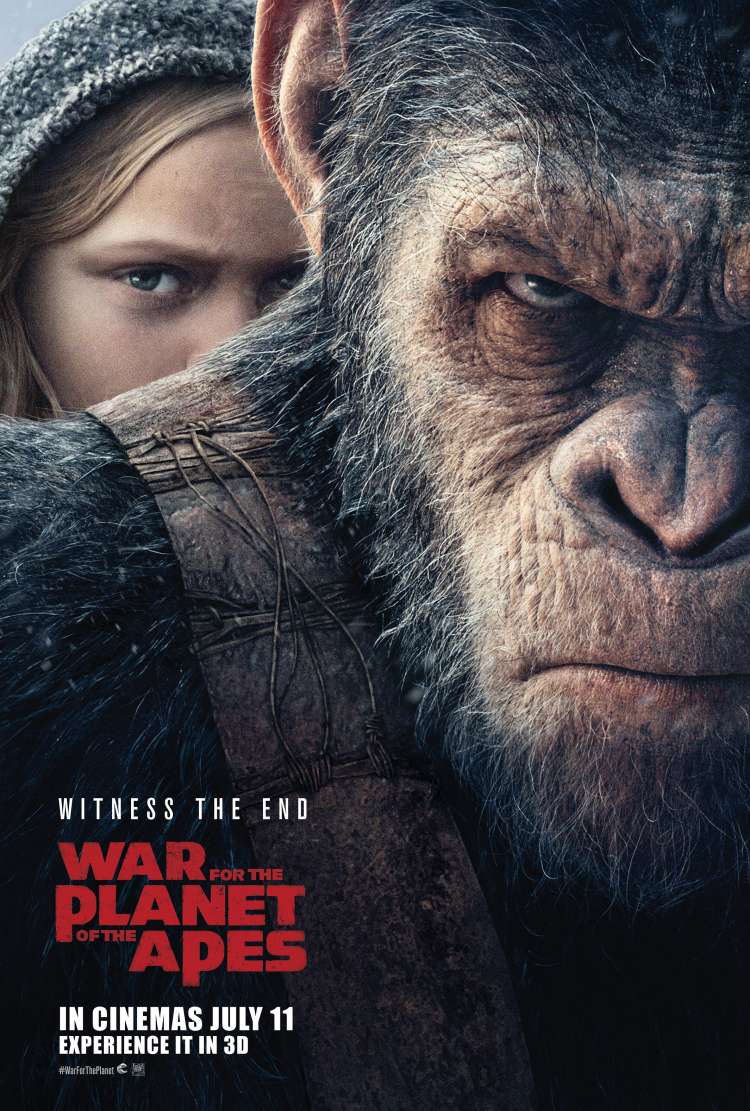 Caesar's last standCLICK TO FIND OUT MORE
12A
FEATURE

Caesar is back! Leading an army of apes to battle the humans that created him. Who will prevail and rule the Earth in this quest for freedom?

Brand New War For The Planet Of The Apes Clip

War For The Planet Of The Apes New Trailer

The reviews are in, War For The Planet Of The Apes is a certified hit

New War For The Planet Of The Apes Clip

New War For The Planet Of The Apes Trailer

No mercy. No peace. This is war! An emphatic new War for the Planet of the Apes trailer crashes in