Enter Forky: the end result of Bonnie getting creative with some cutlery, a pipe-cleaner, and some googly eyes. He’s also her spork-shaped support system. Forky, as voiced by Tony Hale, is a fine addition to the gang: comic relief one moment and moral compass the next.

Like Mr Potato Head deciding between wearing a grin or grimace, the announcement of Toy Story 4 was met with as much excitement as reluctance. The Toy Story trilogy had a pitch-perfect ending that delighted children and destroyed adults. So, the question is, do we actually need a Toy Story 4?

After original owner Andy swanned off to college, our favourite toys are now firmly on Bonnie’s turf, although she’s due to start kindergarten where there are no toys are allowed: harsh! Enter Forky: the end result of Bonnie getting creative with some cutlery, a pipe-cleaner, and some googly eyes. He’s also her spork-shaped support system.

Something of an existential crisis plagues the newly conceived Forky, and it’s up to Woody and co to make sure that the uncertain utensil makes it to the end of a pre-kindergarten road trip. However, some antique toys led by Gabby Gabby (Christina Hendricks) have got their own plans for our favourite sheriff.

Bo Peep (Annie Potts) returns in a starring role, albeit in porcelain, and along with Woody and the new crew, eats up most of the screen time, leaving nothing but scraps for most of the old favourites. Good job it’s worth it. Forky, as voiced by Tony Hale, is a fine addition to the gang: comic relief one moment and moral compass the next.

Much has been said about Keanu Reeves’ stunt biker Duke Caboom too: so much in fact, that with a certain sense of irony, he’s almost a disappointment. Best of the new bunch though is Keegan-Michael Key and Jordan Peele as the carnival prizes, Ducky and Bunny, who bring with them the tried and tested bickering double act, but make it feel fresh and funny.

Highlights include Ducky and Bunny’s unconvincing, and excessively aggressive, escape plans and a returning Combat Carl proving once again that three’s a crowd.

As you’ve come to expect with the franchise, it’s not all light-hearted laughs though: there are questions of personal fulfilment and our sense of belonging which are addressed by both humans and toys alike. And of course, these are the bits which hit hardest for the adult audience.

As far as the younger audience goes, the new nightmare fuel is the quartet of ventriloquist dummies which make Toy Story 3’s manic monkey with a miniature cymbal look like Curious George. Add to that a handful of almost unsettling references to Stanley Kubrick’s The Shining and there may be some serious eye-covering required.

Although it could garner criticism of being the same game with different players, Toy Story 4 comes on like an old friend where it doesn’t really matter what you get up to, just as long as you’re together. Whereas Toy Story 3, gave us closure, the fourth film suggests that, while we want it, we’ve always got a friend in Toy Story. 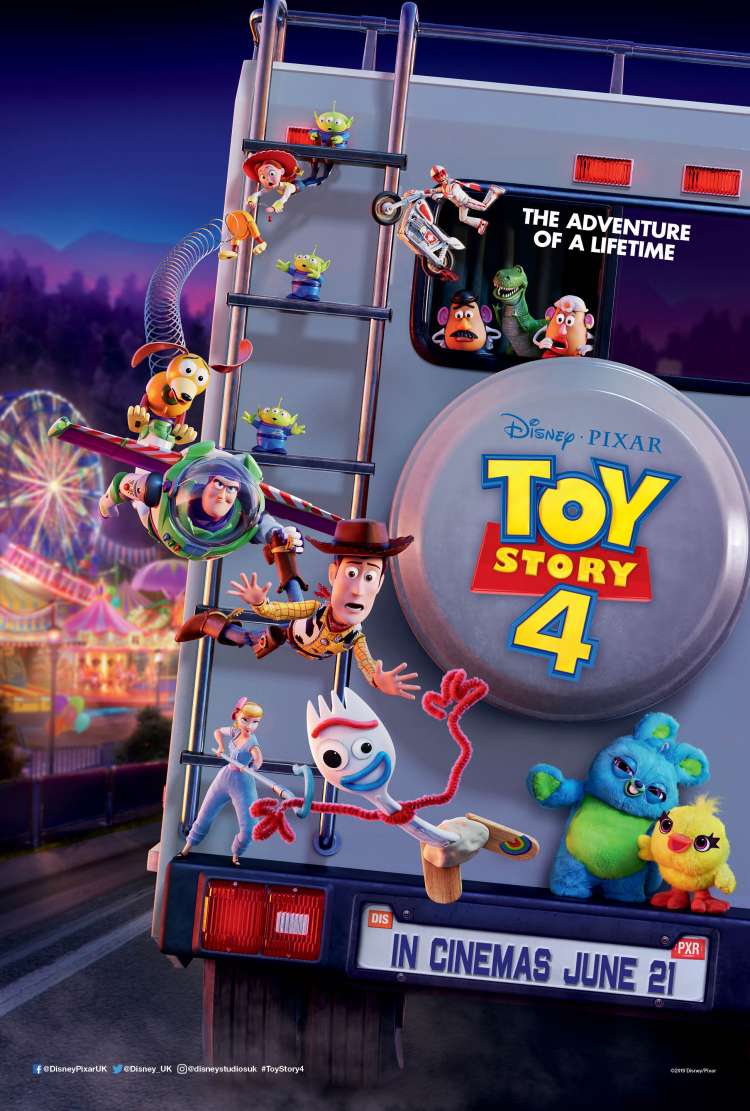 The Adventure Of A LifetimeCLICK TO FIND OUT MORE
U
TRAILER

All of your favourite toys are back, but there’s an odd-looking newcomer joining them in the sweet first look at Toy Story 4