A new year means new movies, and there are so many #MoviesWorthWaitingFor in 2022.

Musicals are well and truly back in fashion and after Spielberg’s West Side Story stole our hearts all over again, there’s so much to sing about in the new year. All of your favourite animal superstars are back for the star-studded Sing sequel, Joe Wright brings a new take on a timeless tale of a tragic love triangle with Peter Dinklage starring as Cyrano, and Kenneth Branagh takes us back to his childhood with a tender coming-of-age story set during the Troubles in Belfast. If that’s not enough to hook you, then there’s also the follow up to the feel-good hit Fisherman’s Friends and an all-new Elvis biopic too.

After so much time stuck at home, there’s no place like the cinema to escape for epic adventures in the year ahead. Take an action-packed trip around the world with Tom Holland’s treasure hunter Nathan Drake in Uncharted and join Kenneth Branagh’s Poirot on a killer cruise in Death On The Nile. More homegrown adventures awaits as we reunite with the esteemed ensemble cast of the nation’s favourite estate as Downton Abbey enters A New Era and a beloved classic comes back to cinemas in The Railway Children Return. If otherworldly adventures are what you seek, then there’s the thrilling final instalment of the Jurassic World trilogy, a return to the wizarding world for the next chapter of Fantastic Beasts that promises to spill The Secrets Of Dumbledore, and the long-awaited trip back to Pandora in Avatar 2.

The action doesn’t end there! Tom Cruise’s iconic 80s character make a comeback as everyone’s favourite aviator finally flies back into cinemas to take our breath away in Top Gun: Maverick.

It’s to nobody’s surprise that superheroes are still dominating the blockbuster stage and it’s Marvel leading the way. 2021 launched Phase 4 and unleashed the multiverse, now we will see three new entries in the main MCU storyline. There’s Doctor Strange In The Multiverse Of Madness, Thor: Love And Thunder, and Black Panther: Wakanda Forever. Sony’s Spider-Verse continues to expand further too as a new Marvel legend makes his debut with Jared Leto starring as Morbius. Plus, there’s the much-anticipated first part of the sequel to the animated Spider-Man sensation that takes us Across The Spider-Verse.

Never too far behind, DC also comes with exciting new projects of their own. Robert Pattinson becomes the bat in Matt Reeves’ menacing The Batman, Dwayne Johnson joins the DCEU as Black Adam, Ezra Miller encounters Batmen from different eras in The Flash, and there’s even some family-friendly antics with star-studded animation DC League Of Super-Pets.

A lot more animated adventures await as Pixar bring two new projects. Prepare for a different beast of coming-of-age story in Turning Red and there’s something to send Toy Story fans buzzing with an origins/spin-off centred on the astronaut who inspired the action figure in Lightyear. Sonic The Hedgehog speeds back into cinemas for a sequel that’s set to feature Tails, Knuckles, and more of Jim Carrey’s Dr Robotnik. There’s more from Illumination too, with the Minions: The Rise Of Gru revealing Gru’s origins and an all-new animated Super Mario movie with Chris Pratt voicing the video game icon.

Horror fans can enjoy an all-new Scream, the final chapter in the Laurie Strode vs Michael Myers saga in Halloween Ends, and a mysterious new horror from the Oscar-winning mind behind Get Out and Us: Nope. There’s more scares in store as Guillermo del Toro takes us to the carnival in Nightmare Alley and the director of The Day After Tomorrow reveals the dark side of the moon in Moonfall.

For further information on these films and all of the major movies coming to cinemas in 2022, be sure to keep an eye on our website and bi-monthly magazine that’s your ultimate guide to cinema. 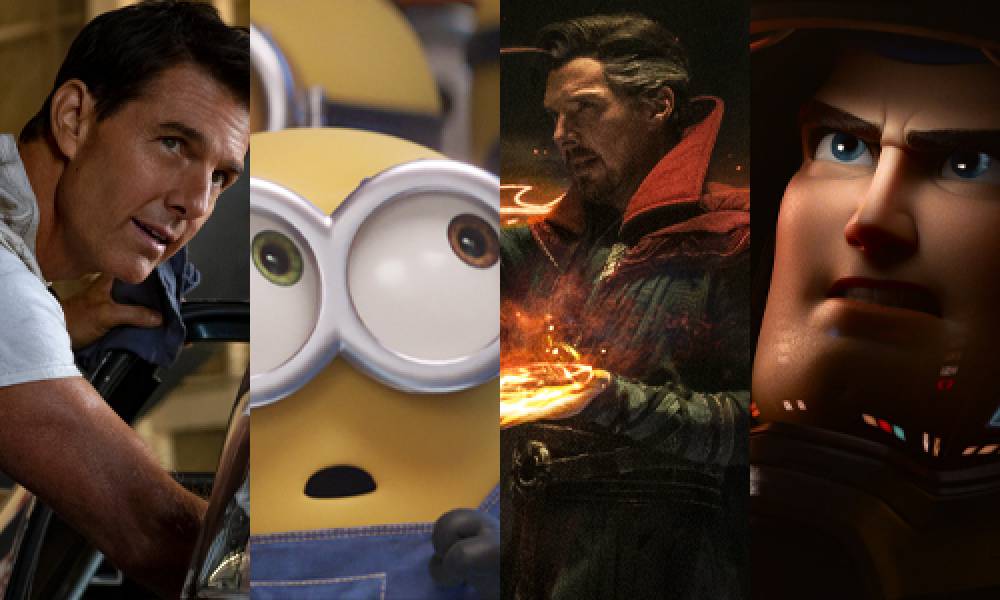